We woke up before 7:00 this morning in anticipation of hitting the 1,000 mile marker in the afternoon. I left just before 8:00 to begin the Roller Coaster, a 13.5 mile section of several ascents and descents. We spent the majority of our day going up and then going down and repeating it over and over. It wasn’t like it was super difficult, it was just really hot out, almost 90 degrees, so we were contending with that as well.

Almost four miles into the day, we came upon some awesome trail magic at a gravel road crossing. 2012 thru-hikers Steamer, Runner, SOS, and SOS’s wife, Trail Mama, were cooking up hot dogs and hamburgers. They also had a ton of snacks and drinks. We both downed a hot dog and hamburger each plus some chips and Gatorade. It was perfect timing to fuel us through the Roller Coaster. We had actually met Steamer at Gooch Gap only three days into our thru-hike at a hiker get-together for St. Patrick’s Day. It was great to see him again and talk about all things AT with the group.

I set off back into the woods as Miles waited for a cheeseburger. After a few miles I stopped to use the privy at Sam Moore Shelter and saw the biggest spider I’ve ever seen in the woods before. Thankfully, it was dead, but I kept an eye on it just in case. Miles had passed me without him knowing when I stopped at the shelter, so I only hoped he would wait at the 1,000 mile marker when he realized that I wasn’t there. There was no chance of me catching him, so I just kept going at my normal pace.

Unfortunately, we had to skip out on Bears Den Hostel, even though we would have loved to stay there. It just would have been too short of a day for us after taking three days off. I stopped at the Bears Den Rocks to take in the view before heading to our big milestone stop of the day. I knew when I saw Miles down a hill near a stream a couple miles after Bears Den that we had finally made it. 1,000 miles!!! I have to admit, the fact that we’ve walked that far all the way from Georgia still seems surreal to me. Never before in my life would I have thought that I would continuously hike for 1,000 miles. And we’re not even halfway to Katahdin yet! This may seem daunting to some, but we are still having an awesome time out here and have even started reminiscing already back to our first days on the trail. The beginning of our journey. Oh the days…

After getting our 1,000 mile photos, we headed on towards the Virginia/West Virginia border. We will hike along the border for 15.1 miles before heading into WV tomorrow morning. I suppose technically we’re still in VA so I’ll save my thoughts on our 40 day trek through the state for tomorrow.

It was a long day to say the least. The heat wore us out and we ran out of water just as we reached the shelter. We got in around 7:15 and proceeded to chill on the Adirondack chairs on the shelter porch before setting up our tent. We thought about staying in the shelter, but when we spotted the two HUGE spiders inside, our decision was easy. We’re tenting without the rainfly tonight to negate the heat as best we can. Miles checked the weather and there is a 0% chance of rain, so we feel pretty safe for tonight. I’m pretty sure the city lights in the distance are Washington DC or at least the metro area of the district. It’s strange to look back on the city from the quiet of the woods. We were only there mere days ago.

It’s been a late night, but it looks like it will be an early morning so that we can get into Harpers Ferry before noon. Hopefully I’ll have an ATC photo to post soon. Harpers Ferry here we come!

Question for the audience: Does anyone know what the yellow flowers with orange accents are along the trail? The petals are all over the trail in this area and I saw one of the flowers fall from one of the tall trees. I’m terrible with tree identification, so if anyone knows, I am curious to discover the origin of these petals. 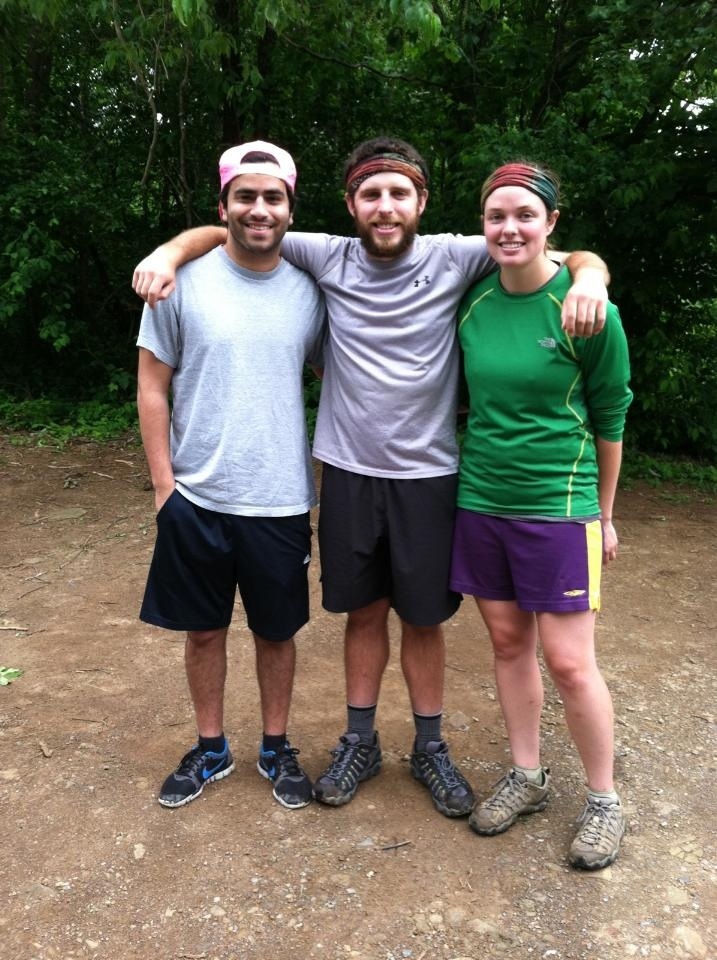