For some reason, admitting to that simple fact is strange. Mostly because I’ve never written a book before in my life, I’ve only hit the tip of the iceberg in regards to my knowledge on publishing, and to be honest, I’m still trying to figure out if our story is even remotely interesting enough to be published as a hiking memoir.

It’s a daunting task. But then again, so was our thru-hike.

Two months had passed in 2014 and I had barely made any progress in my attempts to begin writing a book. While I was behind in my writing goals, I was ahead of myself in other areas of my life that I have been working to improve. Since I began running on my own during my freshman year in college, I always found myself out of shape in the winter. It’s really hard to motivate myself to run outside when it’s 10 degrees, so I would stay inside, go to the gym a few days a week, and get back into shape once the temperature warmed up in late March or so. This year, however, I sucked it up and took on the cold. My sister and I are running a 5K on April 6th in Bucksport, so since early January, we’ve been running, lifting, and going to the gym 6 days a week. I’ve retired from marathons for the time being, but I’m contemplating doing the Maine Half-Marathon in October again this year.

Miles and I have been eating as healthy as ever. Miles has eliminated pretty much all of the “bad” snacks that infested our cupboards. We’ve cut down significantly on our carbohydrate consumption, which used to make up the majority of our diet. I don’t remember the last time I had pasta, which I used to eat multiple times a week, we’ve switched over to almond-based crackers, nuts, and vegetables for snacks, and I’ve really cut down on the chocolate. I’m pretty much obsessed chocolate, so I have to say that cutting that down has been the hardest for me. Ha! I sound ridiculous right now, but it’s so true. A couple of bars of dark chocolate per day, that’s it. We always have vegetables with dinner, salad-based meals a couple times a week, and no red meat. We don’t keep beer in the fridge and we rarely buy a bottle of wine. We don’t keep a lot of snacks around and by the end of the week, our cupboards and refrigerator are empty. And that’s the way we like it.

So, I think we sound super boring after reading what I just wrote. We’re not perfect by any means with our food choices, but I think when we do indulge some or go out for drinks with friends, it’s that much nicer. You know how they call desserts, treats? Well, they’re treats for a reason. You’re “treating” yourself to something nice that you don’t normally have. And I’m not just writing about food just to write. Our food choices that we’re making now are a direct consequence of our thru-hike. I categorize our eating evolution in the past year into the following phases:

This is the phase leading up to our thru-hike. It started about a month prior to our departure, but picked up in intensity about 10 days before we left for Georgia. Bottom line is I didn’t give a shit. I ate whatever I wanted to and however much I wanted. I had my last po’ boy, last whoopie pie, last macaroni and cheese, last whatever. If it had chocolate or cheese in it, I was eating it. Who knew the next time I would have a hearty meal! I wasn’t taking any chances and I finally had a good excuse to eat to my heart’s content. I’m not joking when I say that I gained about 5 pounds in those last couple weeks at home. I cringe to think about it now, but damn was that last whoopie pie good.

Phase 2: OMG I Can Eat Little Debbie’s All Day and Still Be in Shape!

This is the beginning of the thru-hike phase when you hike all day, work your body hard, and have the reward of Little Debbie’s, Hershey’s bars, Nutella, Pop-tarts, and cheese as your reward. Not to mention it’s Girl Scout cookie season, so you’re living off the Thin Mints and Tag-a-Longs for awhile. Not all thru-hikers eat as bad as we did, but it was affordable and our bodies were able to process that food into energy. I was excited to thru-hike for many reasons, but the food was definitely a big deal. And we can’t forget town food. We were just talking about our zero day in Franklin when we stayed in our motel room most of the day eating pizza, wings, doughnuts, and drinking beer and soda. It was amazing and it makes me laugh to this day.

Phase 3: This is the 150th packet of Pop-Tarts I’ve eaten in as many days. Gross.

It’s near the end of the hike. You’ve switched up some of your food options in your pack, but you’re ready to eat vegetables again. Cheese that doesn’t melt and create pools of oil in your stuff sack would be a start. Maybe a nice glass of milk in the morning. The last ten days or so, I unwillingly stuffed pop-tarts and Clif bars down my throat. It was energy to hike, it was no longer enjoyable. Pasta Sides sucked, Little Debbie’s were abhorrent, and if any person dared shove a stick of Hormel pepperoni in my general direction, I may have vomited all over their face. But not to worry, real food is coming soon!

This stage didn’t last all that long for me. But the first few days at home, I did treat myself. I actually found that I didn’t want to eat as much as I used to at meals. My body was used to snacking throughout the day, so it only made sense that my stomach was conditioned to that directly after thru-hiking. A longer stage for some, but shorter for me personally. Slowly, I found myself back into my old eating habits. Not as bad as they were, but when you’re not exercising as much and taking some liberties with your food and drink consumption…well, it slowly but surely adds up. We’re not unhealthy by any means, but we know how it feels to be in the best shape of our lives, so we knew it was time to make some changes.

Phase 5: Purged of the Junk, Time to Eat Real Food.

And by real, I mean pretty much not eating anything we ate while we hiked. It is by no means easy for us to change our eating habits, but we’re doing pretty good so far. We can aim for perfection, but know that we are not perfect. We live in such a food-centered society. We learn from an early age to eat everything on our plate, even if it’s a big plate, to go back for seconds, that getting the most food for your dollar is best no matter the calorie value. As we step back and challenge our own beliefs on eating and drinking, it’s very easy to see how difficult it can be to maintain this lifestyle. Thru-hiking made us aware of how our food choices were affecting us, our mood, our energy levels, and how important it was to begin healthier eating habits early on in our lives.

It’s tough to change habits that you’ve had for years, but I can think of a million things that are way more difficult than changing how you eat. We’re up for it.

This post has turned into something bigger than I originally planned it to be. And now I will get to my original point.

So, I put off writing this “future book” as I got back into running, eating healthier, and quickly becoming obsessed with A Song of Ice and Fire series by George R.R. Martin. It’s more commonly known as the Game of Thrones book series, but you’ve probably heard of it because of the HBO series. Season 4 starts in 31 days for those counting down at home!!! It’s been just short of taking over my life. I’m not sure what I’ll do when I’ve finished reading the fifth book in the unfinished series, which due to my calculations should be sometime in May.

So, we’re in the first full week of March and the writing of said book is finally underway. There is a very, very, very long way to go in this process and I honestly don’t know what will become of my labors, but I’m willing to try something that I’ve never attempted before. Beyond the blog, I don’t really talk about writing this book and honestly it feels kind of silly for me to say that I’m writing a book, or attempting to at least. In a world where we are surrounded by millions upon millions of books, I am trying to remember that I am first and foremost writing it out of a passion for something that I have wanted to do more with for several years, but never knew how. I’m beginning to discover this world and I hope to exponentially increase my knowledge on writing and publishing within the next year. I am also constantly thinking about what our experiences on a thru-hike can give to others in book form. What will a reader learn from what I write? Will it be worth reading? I could never expect fame and fortune from what I write, but I only hope it will be true and timeless, and not only be meaningful to me, but to others as well.

During my quest for publishing knowledge, I have decided to write a book proposal before setting out to write the entire book. While a proposal is a solid approach towards finding a publisher, it will also help me clearly define my approach to our story and make the writing process more organized and cohesive. One section of the proposal is a sample chapter. I have ideas of my own and I’ve talked to a few other people about their ideas as well, but since all of you have followed our story for several months, I would love to have your input as well!

What was the most captivating or interesting day/moment/section of our hike that you read on the blog? I will be re-writing everything of course since all of my entries on the trail were written with only one look-through at the end of that night, but I would very much appreciate any and all input.

As I enter into the book phase of our story, I will no doubt keep you all updated. As I look at my calendar, I see that the date of our first day on the trail is approaching very quickly. A year flies…I think it’s time to start planning the next adventure. 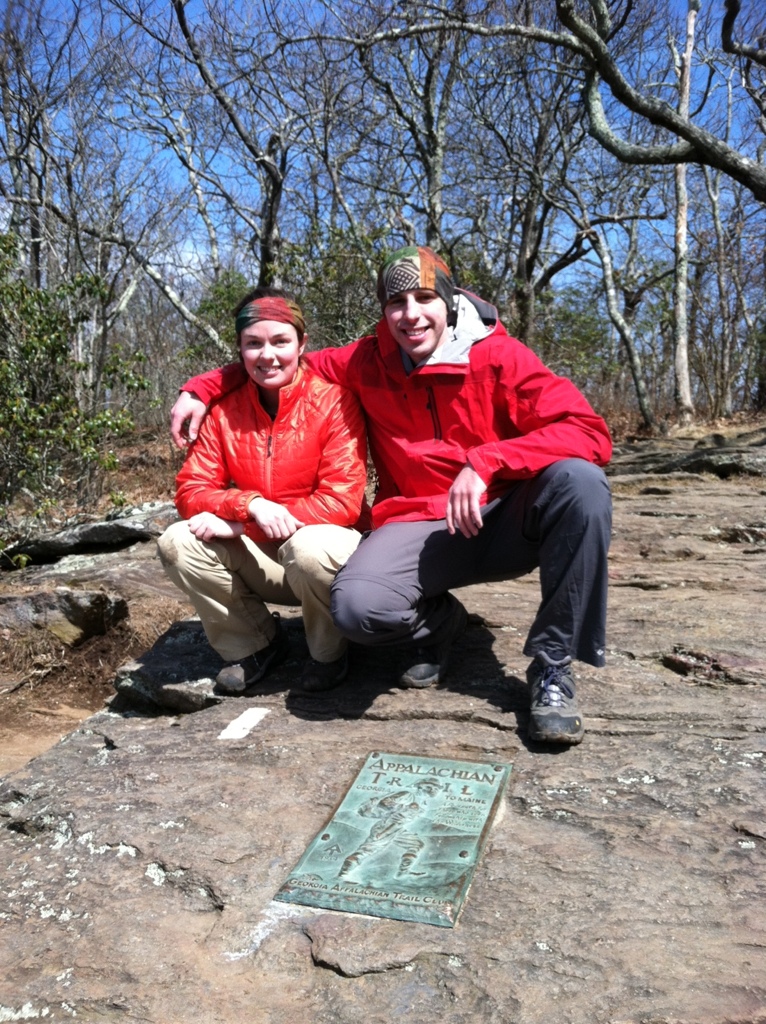