It feels like spring. It snowed on Friday, yet only two days later most of the snow in our driveway and super small yard has melted. At the end of January I noticed bulbs beginning to pop up in the garden. And the damn mint is even growing! Don’t get me started on mint, which I personally consider a weed considering how it takes over entire gardens. Anyways, the bipolar temperament of Mother Nature this winter has been confusing for me, a lover of all things snow. What has this odd thing of a warm and relatively snowless winter been like so far?

-We certainly did not have a white Christmas. Instead, I played baseball with my 3 year-old nephew in my parents’ front yard. Not to mention that Miles and I played tennis on Christmas Day as well. The nets were put away for the year, but we made do. 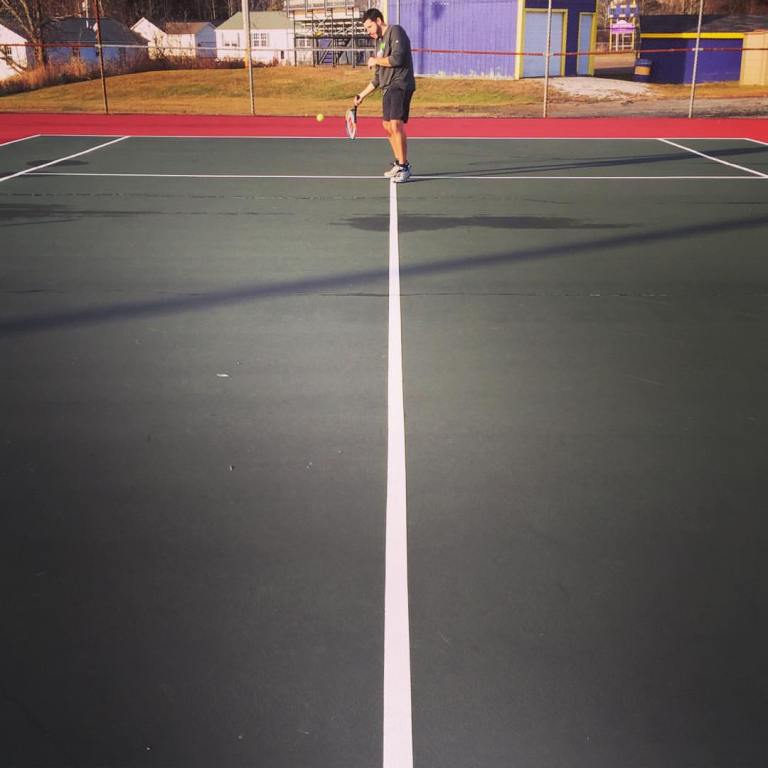 -At work, I use my lunch break time to walk around downtown Portland. Last winter, I ceased this habit for more than a few months because of the cold and wind. This winter, I haven’t had to stop at all and have consistently kept up with it. The one day I decided I wasn’t going to go outside and stay in the office all day I went crazy. It’s hard enough for me to sit at a computer most of the day; my daily walks through the West End are what keep me sane and I believe keep the creativity fresh and fight the mid-afternoon fatigue.

-We take our cat, Pi, outside on a leash. It’s true. We live at a busy intersection near a community college and foxes are rampant in the area. They live under our garage. There’s no way in hell we would let him out on his own. So, last summer we decided to try out a harness and leash. He’s amazingly awesome with it and persistently asks to go outside every single day. It’s dark out when I get home from work, so it’s mostly a weekend gig for now, but he’s into it. We figured this would stop when the snow came and the cold weather. Well, we haven’t had much of either and he doesn’t really mind the snow, so we’ve continued the routine. Pi is just fine with our mild winter. 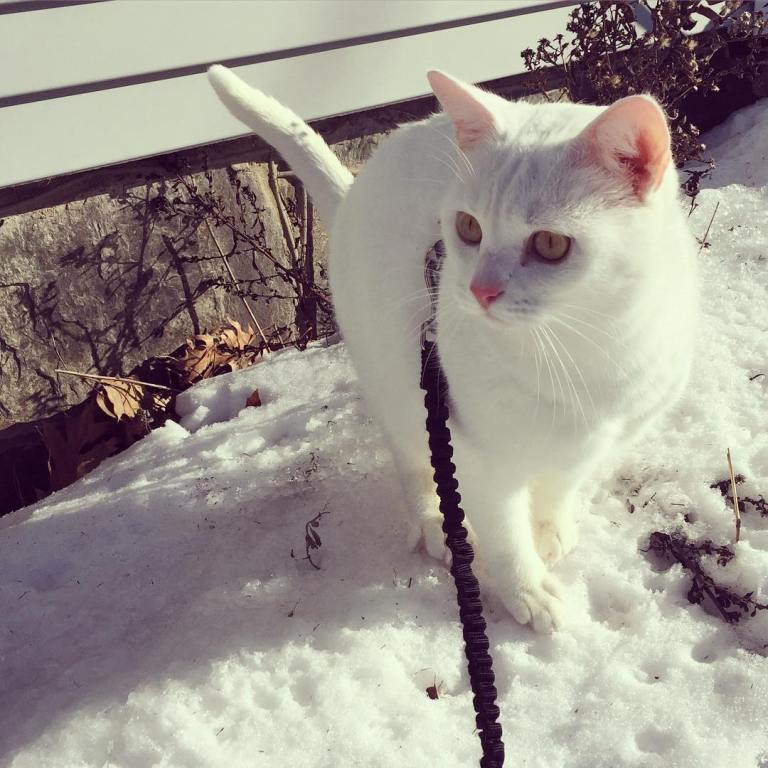 -I bought my first pair of cross-country skis in January. I’ve wanted to buy some for a few years and finally went up to L.L. Bean and did it. Of course, just like the year when I got snowshoes for Christmas from my parents, it hasn’t snowed much. So, every opportunity I have had, I’ve gone out and used my skis. We’re lucky to have several great places to ski nearby. I’ve headed just a few minutes down the road to Robinson Woods in Cape Elizabeth to ski and yesterday went up to Pineland Farms in Gray to ski their groomed trails through the woods. It was a perfect day to ski and I came home with almost the entire back of my shirt drenched in sweat. While I have been downhill skiing almost my entire life, I stopped cross-country skiing when I was 5 because I outgrew my xc skis and really my sisters and I were all way more interested in downhill skiing anyways. I went once in college with my friend Marsha and we disastrously got the bottoms all covered in ice and gave up and walked back to her house. Needless to say, I’m no expert on xc skiing form these days, but it’s fun nonetheless. 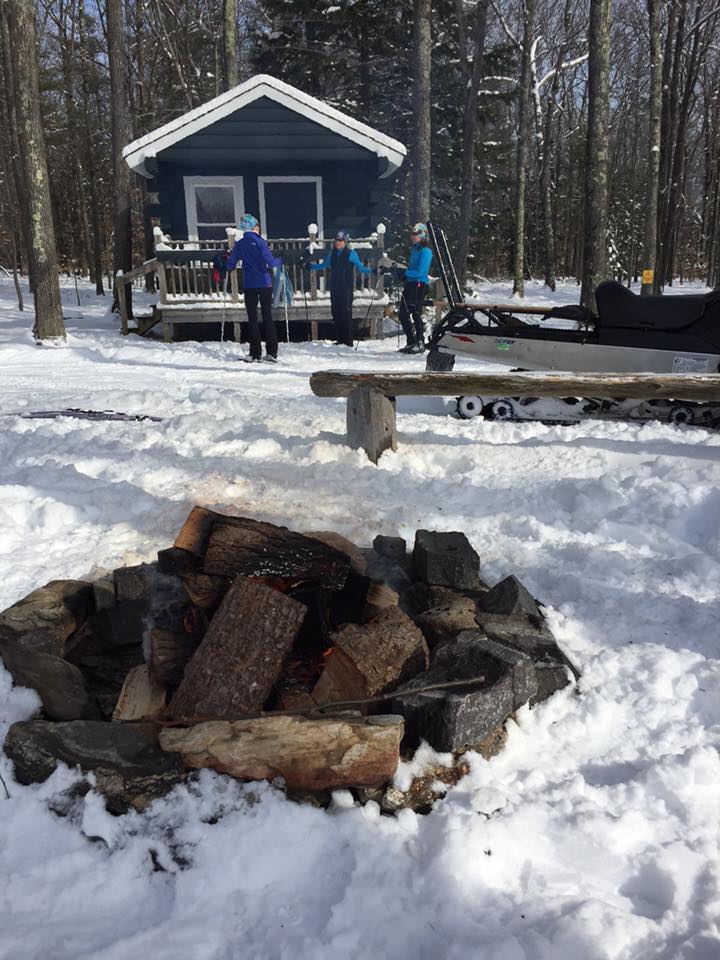 -Our heating bill has been low! Great for the budget, but it only makes me think of climate change 😦

-Running outside has continued throughout the winter as most of the time the sidewalks and roads have been devoid of ice.

That about covers my rant on our winter so far. It’s supposed to snow tomorrow, but we shall see if that actually holds true.

Okay. 2016 adventures. Where am I going and what am I doing this year?

The most exciting news is…I’m heading back to ICELAND!!!

I cannot wait to go back and spend more than 24 hours there. I originally planned to go solo as Miles will be in grad school until the end of July. But, I was talking to my dad about my plans and he decided to come along with me! We will be in Iceland for 9 days and heading out in late May. We’re renting a camper van from this awesome company kuku kampers and driving the Ring Road for a week, exploring Reykjavik for a day, and will end our trip at the Blue Lagoon (because I just have to go back) before hopping the bus over to the airport.

One of the coolest things besides the spectacular beauty that we will witness during our road trip, is that the sun will not set until after 11:00 PM and will rise again around 3:30 AM! Essentially, it will hardly be dark and we can take some great photos during that late night twilight time. The sheep should be out, so we’ll need to be cautious of them as they will be roaming freely throughout the country at that time of year. We will most likely miss the Northern Lights, but we are trying to plan a way to go to the Arctic Circle. If that doesn’t happen, then we at least plan to go the edge of the Arctic Ocean.

You may be asking yourself, “she was just in Iceland only 4 months ago. Why not go somewhere new?” And the simple answer is that Iceland blew me away. I could not wait to go back. While I spent the majority of my 24 hours there in Reykjavik, it was such a tease. I spent most of my October trip in cities of Iceland and Scotland, with the exception of my 2.5 days in the Highlands. No matter where my next vacation would be, I decided I wanted to do more of an outdoors/nature-centric vacation. I tossed around the idea of heading to the western U.S. (I think that will be my next trip) or to the Dolomites in northern Italy. But, I couldn’t get Iceland off my mind. And when I saw how cheap the plane tickets were, I was sold. I could afford the round trip flight, sleep in a camper van, and live off of cooking my own food and gas station hot dogs, which Iceland is apparently infamous for. And that is why today, I still appreciate those months of hiking the AT and sleeping in a tent and navigating our way through new places along the way. I would probably have still enjoyed this Iceland road trip regardless of whether we thru-hiked, but I feel that I can put it into perspective ahead of time. Some nights of sleeping may suck in that van, but imagine what we will see along the way on the Ring Road. That’s why it’s all worth it.

I will be shooting one wedding before we head out to Iceland and then shooting several more mostly in August-October. I have a couple of weddings to shoot in June and July and normally, we aren’t crazy busy with family shoots at that time of year. It’s usually August, September, and October that are the busiest for my sister and I. I sacrificed two BIG weekends for family photo sessions when I went to Iceland and Scotland last October. My sister and I were both completely okay with that decision, but as we grow with each year and our fall becomes busier with weddings and family sessions, I knew that this year I wanted to take my big trip earlier in the year.

Currently, we are shooting 11 weddings this year and it’s very possible that that number will increase to about 14-15! It’s been a lot of work and many days where I come home from my 9-5 job as a Marketing Coordinator, go running, eat dinner, and then get to work on Tandem Studios work. While it is a bit less crazy this time of year, we had our big wedding show in January here in Portland and have been busy meeting with potential couples at least once a week. While I am not ready to take that step of solely being a photographer, I’m starting to think about a game plan and that’s exciting enough for now.

I feel lucky that I do not have to photograph weddings on two weekends this year when two of my friends are getting married. Also, my best friend is having her first baby in early May. I am super excited (and a bit nervous) that she wants me to in the delivery room with her along with her husband and mom. She is truly a third sister for me, so this means a lot for both of us. The kicker is that she lives near Albany, New York and obviously will be having the baby there…so I will have my own hospital bag and camera ready to go in my car, ready to drive the 4.5 hours at a moment’s notice. 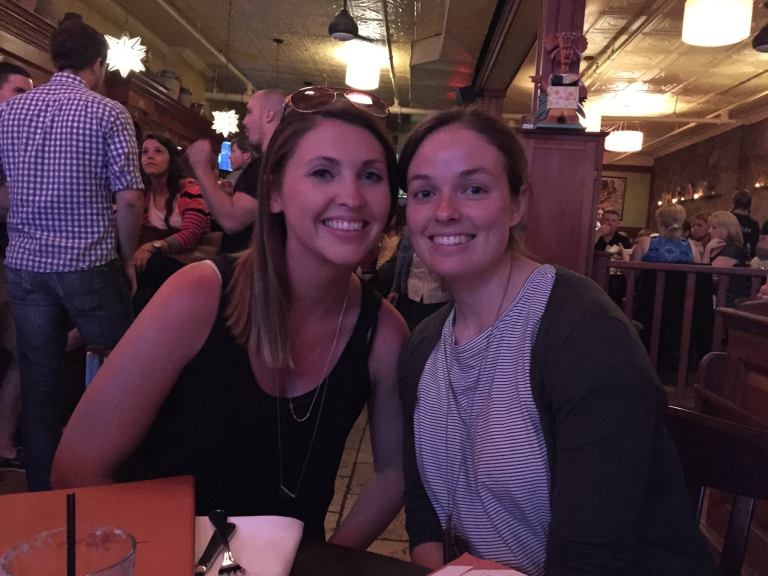 AND, at some point in July or August, Miles and I will be doing Part 3 of the Long Trail. For those just tuning in, we hiked about half of it when we thru-hiked the AT in 2013, hiked from the Maine Junction to Middlebury last year, and hope to hike from where we left off last year to Interstate 89. The ultimate goal is finish the final section next summer. Timing on that will depend on my weddings schedule and Miles’ potential job interviews and soccer pre-season schedule.

Those are the major plans so far for 2016 and of course we always plan to do day hikes in the summer, take trips home to Bucksport, and further explore the restaurants and breweries in Portland.

I will leave you with some more photos from my October trip last year. After leaving Iceland, I landed in the great city of Glasgow, Scotland. I spent two days here and had a blast walking all throughout the city. While I loved Edinburgh too, I’m more inclined towards Glasgow. 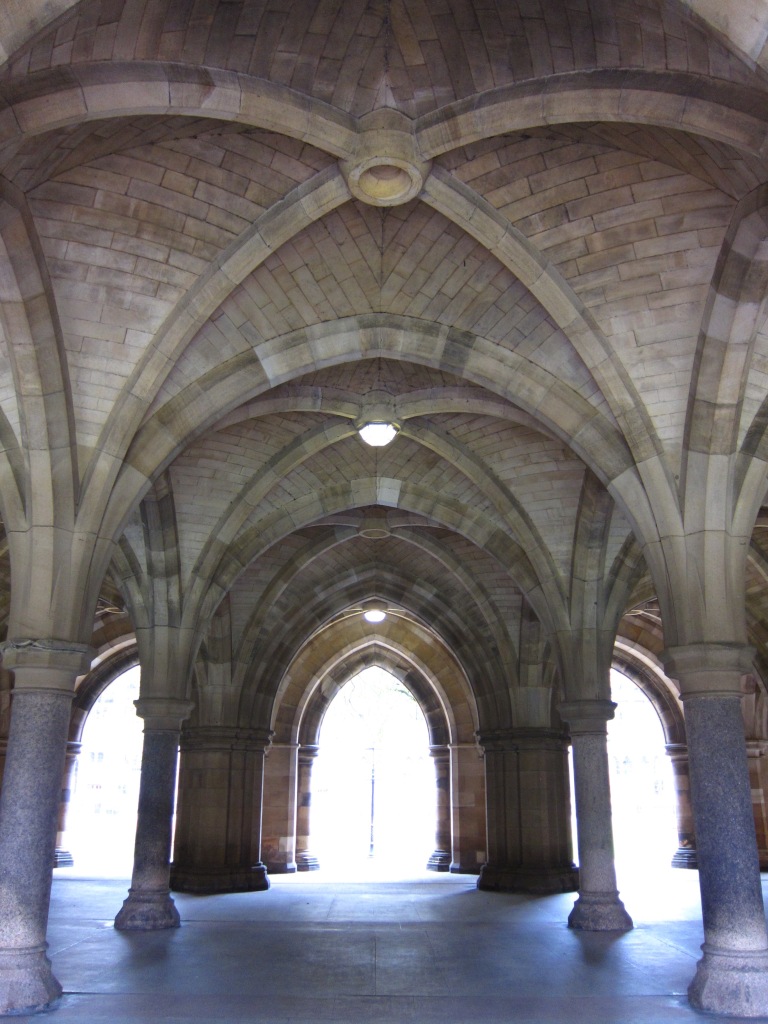 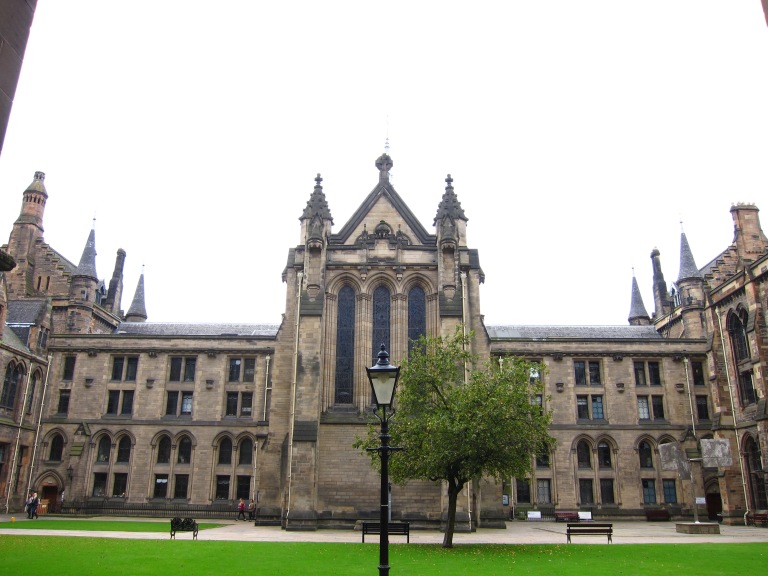 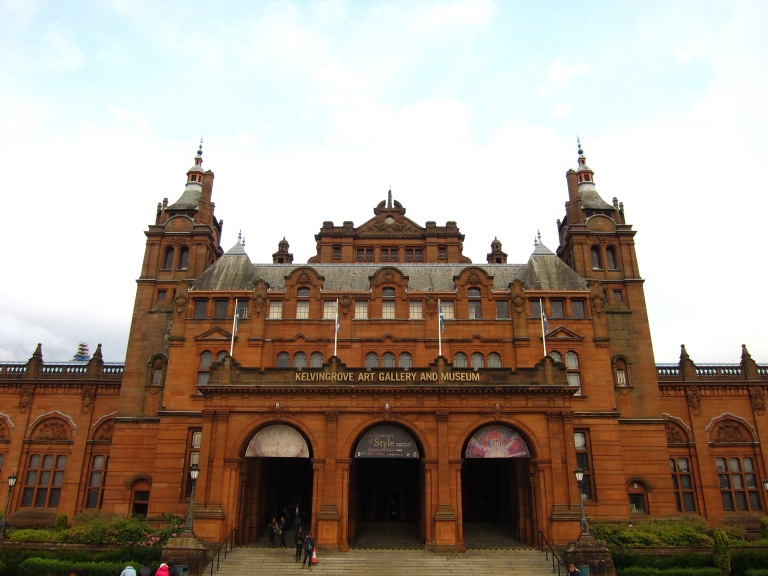 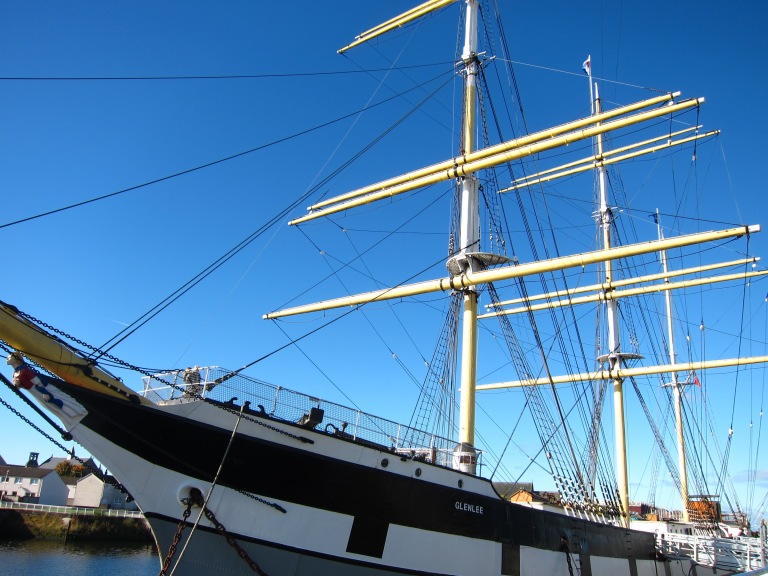 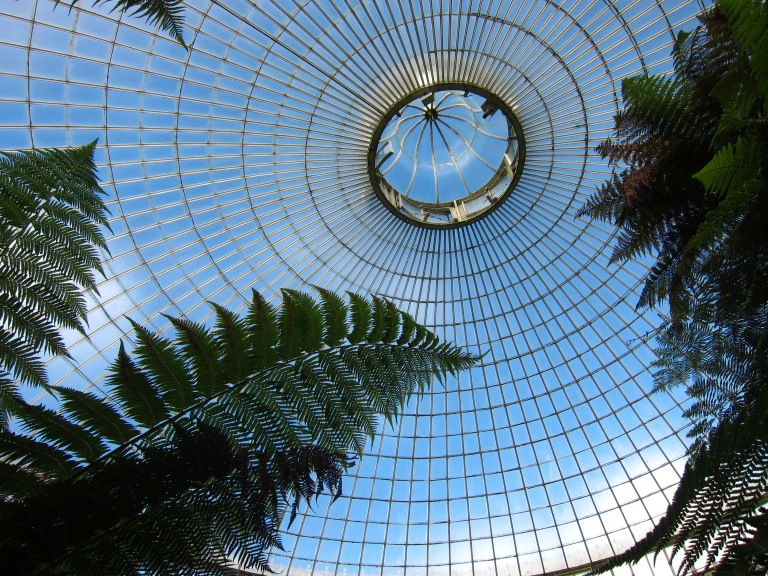 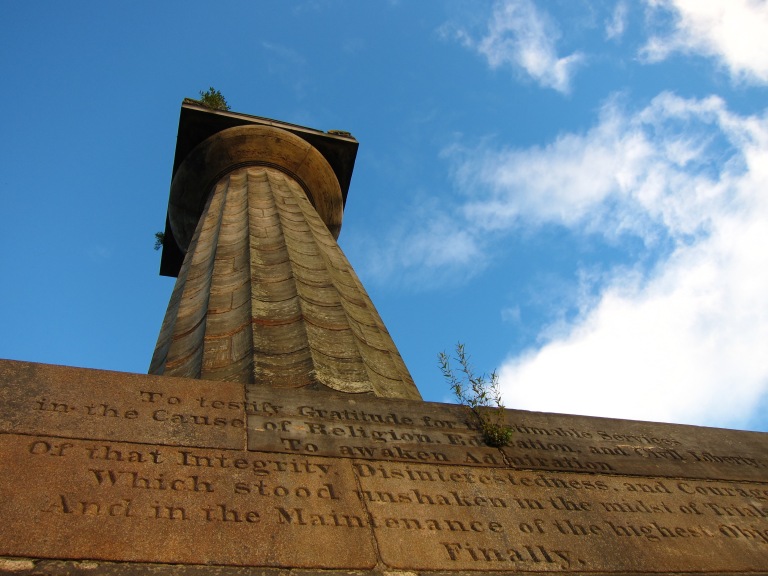