Who prepares for a thru-hike by reading books when you can track down a million resources from the internet?

While I planned about 95% of my upcoming PCT thru-hike through the interwebs, books provided more of the personal inspiration. There are innumerable books on hiking, the natural world, and the various philosophies behind it all; however, there is an unfortunate lack of time in the day to read them all prior to mid-April.

The following books are a few of my personal favorites for pre-thru hike inspiration: 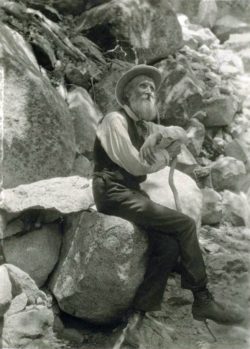 Muir has been on my must-read list for years. He finally made it to the top of the list when I received John Muir: Wilderness Essays for Christmas.

In the collection of ten essays, Muir vividly illustrates the magnificence of Glacier Bay, the dominating peaks of the High Sierra, and a fierce snowstorm in Utah. Muir not only describes vast and incredible landscapes, but he also has a talent for animating the diminutive and seemingly trivial scenes of nature that one can easily overlook.

His extremely detailed accounts of animal encounters were my favorite reads of the collection. In “The Animals of the Yosemite,” Muir recounts the tales of killing two rattlesnakes and how he learned to respect the slithering creatures. He observes, “I felt 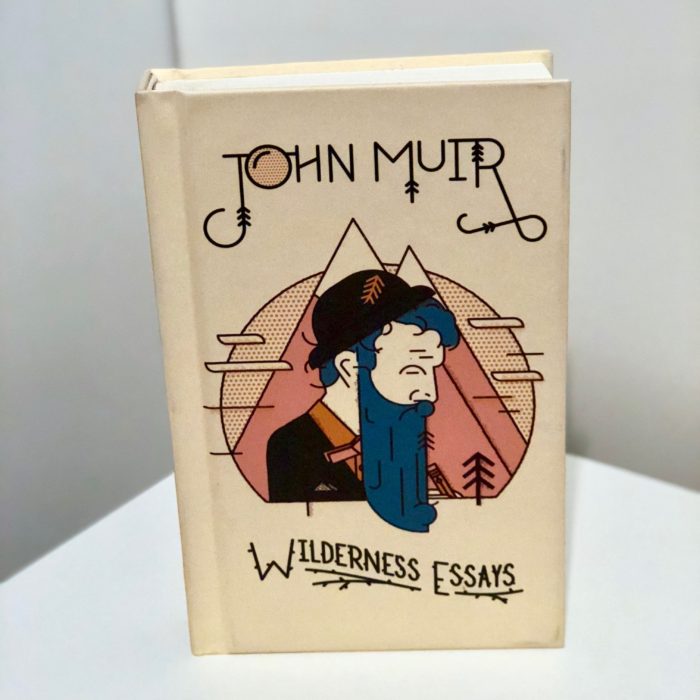 degraded by the killing business, farther from heaven, and I made up my mind to try to be at least as fair and charitable as the snakes themselves, and to kill no more save in self-defense.” Well said, sir.

I also loved his exclamations throughout the essays regarding one wonderment or other. In the same essay, “The Animals of Yosemite,” he comments on the eating habits of bears –

To him almost everything is food except granite… Craunched and hashed, down all go to his marvelous stomach, and vanish as if cast into fire. What digestion!

Not only did I find his style of writing continually captivating, but also effortless to read. That’s not to say that his words were not compelling – in fact, quite the opposite. I know I will carry his vivid descriptions, particularly our shared Scottish sense of humor, along with me as I hike. 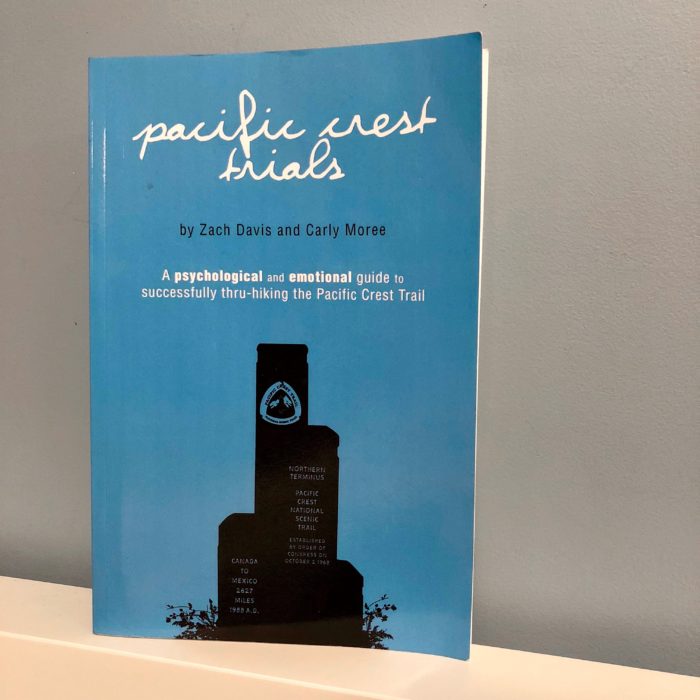 I promise that this awesome resource is not on my list because I’m a blogger for The Trek. If you don’t believe me, read my post on my original blog about Appalachian Trials back in 2013 🙂

Again, as I said in one of my earlier posts, Appalachian Trials, by Zach Davis is a must-read for anyone thinking about thru-hiking in the future. Honest, funny, and extremely helpful, both Miles and I read this one.

Now, replace Appalachian Trails with Pacific Crest Trials and add Carly Moree after Zach Davis and the above statement becomes true for the present day.

But in all seriousness, please read Pacific Crest Trials if you’re considering a PCT thru-hike. I probably didn’t need to buy the PCT version, but I did and read through it in a matter of days. The gear chapter was particularly helpful for someone who knew zip on PCT-specific gear. The book was also a solid reminder to create a list for following three things:

I wrote out these same lists before my AT thru-hike as well and then wrote them into the front of my journal. I plan to do the same for the PCT.

Where I Lived, And What I Lived For 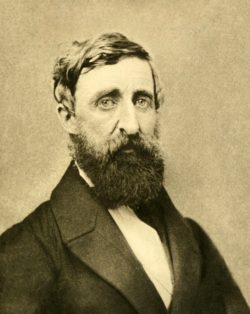 When you grow up in New England, reading the works of Emerson, Thoreau, and Longfellow (among many others) is basically a requirement.

Where I Lived, And What I Lived For is a Penguin Books Great Ideas edition and includes three select chapters from Walden: “Economy,” “Where I Lived, and What I Lived For,” and “Winter Animals.” While I found that Thoreau had more frustration towards the nature of humankind than Muir, I also enjoyed the comparison between his experiment living on Walden Pond to the experiment of thru-hiking a 2,000+ mile trail. Yes. There are vast differences between living in the woods for 2 years in the 19th century versus long-distance hiking in the 21st century. But, both experiments are essentially similar in purpose.

The idea of downsizing your possessions in life to the essentials is thru-hiking at its core. Thoreau lists four essentials – food, shelter, clothing, and fuel. Well, that sounds a lot like the base of any gear list, right?

While the majority of thru-hikers aren’t “living off the land,” there is the goal of carrying only what is needed to survive a 2,600 mile journey. The extras – a pillow, a book, or that extra beer that you carried out from town – are a bonus.

There is certainly debate about Thoreau’s foray into the woods of Concord, but I found his writing to be thought-provoking and relatable to our choice as thru-hikers to live beyond the realm of “normal” society.

Even if it’s just for a few months.

If you equally enjoy history and science and also have a curiosity to learn more about the many origins of trails, then this one’s for you. Moor, a 2009 AT thru-hiker had the same interests and questions…so he wrote a book on the subject. 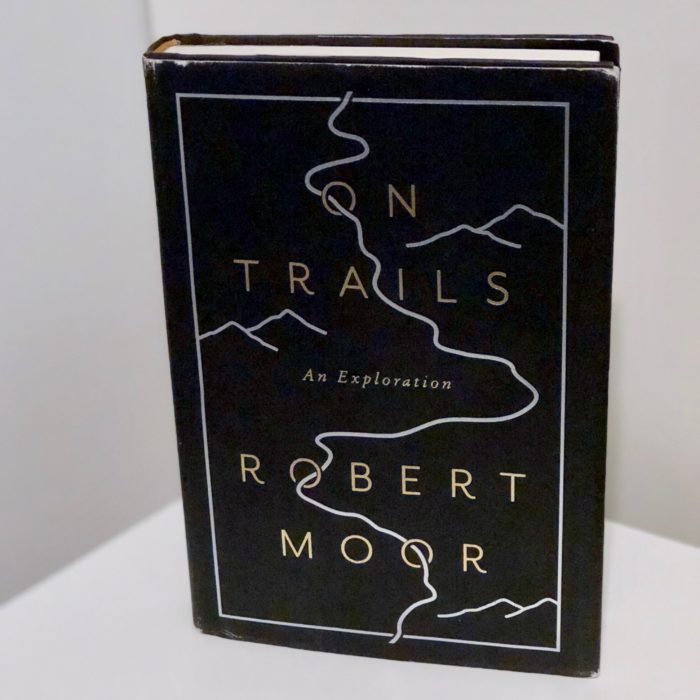 On Trails goes in depth on trailblazing in all forms – from herding to hunting and from insects to humans. It’s a vast exploration of how trails molded planet Earth from all aspects. I particularly enjoyed the chapter on the Appalachian and the IAT’s struggle to become a solidified trail system. How interesting to envision a trail stretching across three continents!

Similar to Thoreau’s work, On Trails is not specifically about the Pacific Crest Trail, but I assume that if you’re reading this blog post, then you have some type of interest in trails.

Ever since reading Moor’s book, I look at trails with so many more questions and insights than ever.

And now that I finally have all of my gear, the question is – do I dare carry a book on trail?

It’s extra weight and I suppose books don’t count as one of Thoreau’s ‘four essentials.’

But, I think I’ll have to side with Muir on this one: “…for the saving of both body and soul, is important, and deserves all the expense and care bestowed on it.”

And the saving of the soul sometimes starts with a good book.